As promised by the Kingdom Swap team, today, November 15th, we will be informing you of the project's next steps.
As in the Open Beta, a lot is being tested/implemented during these 15 days of Pre-Launch.
In terms of economics, we are reaching the exact balance point to make our game fun and sustainable.
Pre-launch end date: December 15th.
Once the official game is launched, no other resets will be done in-game.
All rewards, both Open Beta and Pre-Launch, will be delivered once the official version is released, including backpacks for all players who played the Open Beta.
Nothing else achieved by players during these phases will be brought into the official game.
Everything you need to know about the game/token economy is on the links below:
docs.kingdom-swap
wiki.kingdom-swap.com
Pre-sales and tokenomics information are going to be added to our docs in the next couple weeks, stay tuned!
Whitelist for the Public Round is open for our best supporters.
Whitelist
This is an exclusive opportunity to guarantee a low price, and very limited. As we are looking for real and long-term supporters, be sure to complete all the steps, and to engage with us.
Discord | Telegram | Twitter | Youtube
Pre-Launch Farm Contest Rank
The day for the start of our Pre-Launch phase has arrived.
First some frequently asked questions:
Will the server reset after the Pre-Launch phase?
Yes, you all will keep nothing but contest rewards when the Pre-Launch is done.
When is the official launch:
November 15th we will announce the end of the Pre-Launch phase and the official game launch date.
Do I have to buy premium?
No, premium time is free during this phase.
Pre-launch rates:
Experience: 2x
Loot: 1x
Skills: 1x
Pre-launch information:
NFTs
General:
See you in-game.
Announcement: Major Open Beta Update 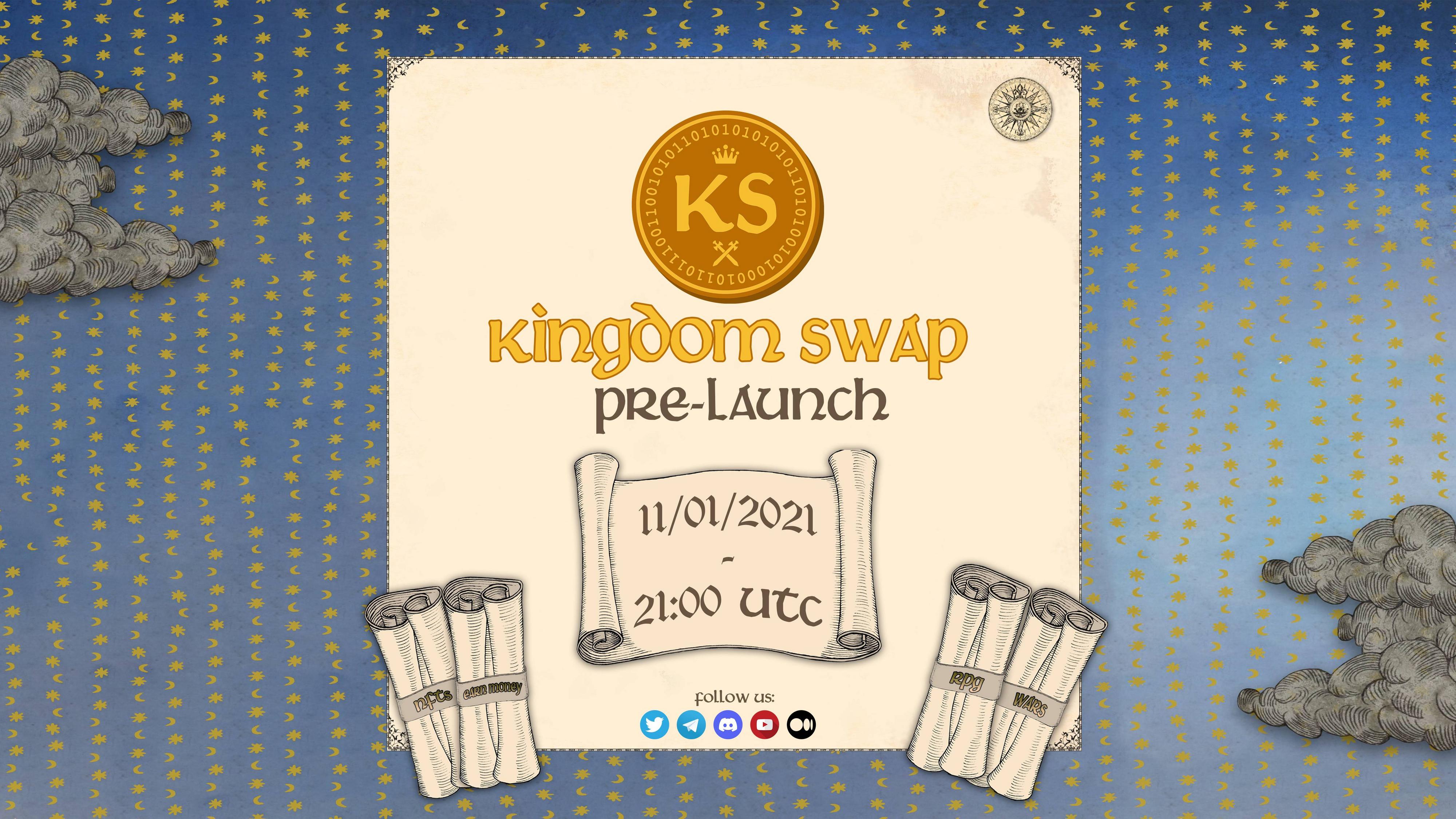 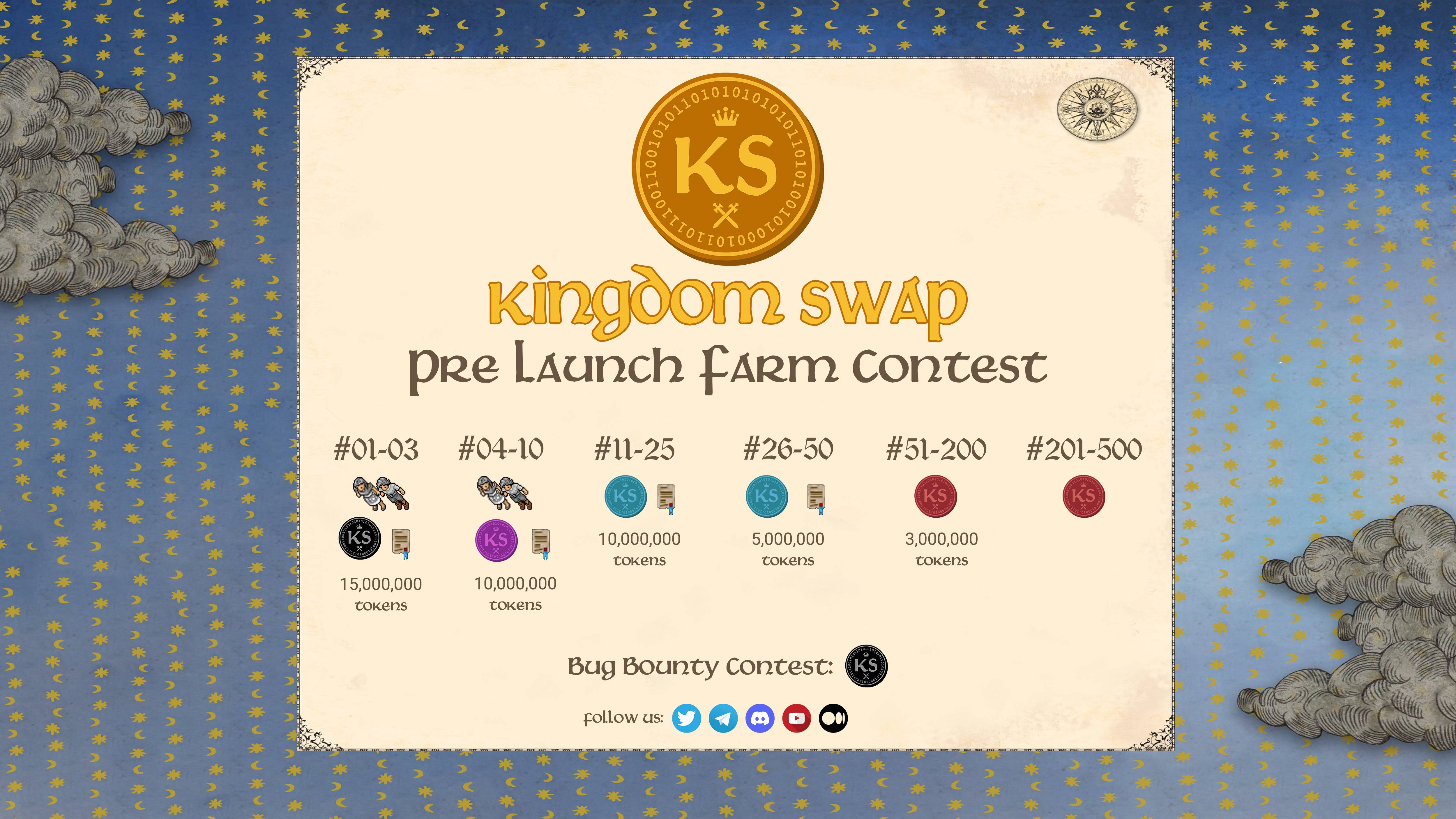 Bug Bounty Contest:
Pre launch phase will also host a Bug Bounty contest, the player who report the biggest amount of bugs will be rewarded with an Epic and exclusive NFT when the game officially launches.
Why do we have to start a new phase without real tokens/money making?
The final part of the economy calculation will take place during this beta phase.
It is also the initial investment phase that must be done before the token/game is released.
Those interested in investing in the project, now is the time to pay attention to the news that are going to be announced.
On November 15th we will make another big announcement, with official release data, tokenomics, whitepaper and roadmap.
Focused on game economics, so that everyone can better understand how everything is going to work in the smallest details.
As everyone knows the game is free to play. But the best features will be available to Premium Accounts, obviously. See below for more information we've already decided:
Premium accounts have the benefit of:
1) Do quests with Level Door;
2) Hunt in exclusive areas;
3) Access to exclusive spells;
4) Promotion in your vocations;
5) Smaller token's withdraw amount;
6) Use boats and carpet;
7) Cast rune spells;
8) Postman quest.
Any decision can be changed during the Pre-Launch phase, so as the Marketing Place prices.
These actions were decided on the stability of the token economy and the game, benefiting everyone who invested in the token and all Premium Accounts.
Remembering that the game is free to play, and this does not prevent players who do not want to invest, to obtain their Premium Accounts playing the game.
We know everyone is waiting for the official launch, but the Pre-Launch phase is sorely needed.
We've improved the rewards for players so they have a bigger goal to play with.
This phase will also give players who failed to enter the beginning of the open beta a chance to reach the top of the rewards list.
Crazy Sunday!
Next Sunday, 10/25 we'll be hosting the Crazy Sunday event, to mark the end of the open beta!
The xp will be increased to 10x and all runes will be infinite for 24h. I hope you all have some fun!
Marketing actions will start appearing again on your favorite streamers/youtubers channels, as we did at the launch of the open beta! So you can expect a lot of new people arriving here.
Again we would like to immensely thank everyone for their help and patience. We are doing our best to make this game our meeting place for many years to come!
Calendar:
October 23th 00:00 UTC - Open Beta Contest is over, gold coins can no longer be swapped into tokens.
October 24th - Crazy Sunday, server shut down at 00:00 UTC
November 1st: Pre launch phase starts at 21:00 UTC
November 15th: Final announcement.

Discord | Telegram | Twitter | Youtube
Today we are going to release our Open Beta Farm Contest Rank.
After almost a week after starting our open beta, we can definitely say that our game is been a success so far. Over 4,100 accounts created and almost 5,000 characters, we are being able to gather tons of data to have the best official launch ever.
Our players have been extremely helpful, and we are fixing a lot of minor bugs that can bother our future gameplay.
To learn more about our first days of gameplay read our medium article HERE.
If you are playing our open beta, you are automatically participating of our contest. Learn all the rules HERE.
We have also created a FAQ channel on our discord. Access if you still have any questions about our game.
Open Beta Farm Contest Rank
We want to thank everyone who is playing this innovative game we proudly created for the community. You all have a good journey.
See you in Kingdom Swap.
Best regards. 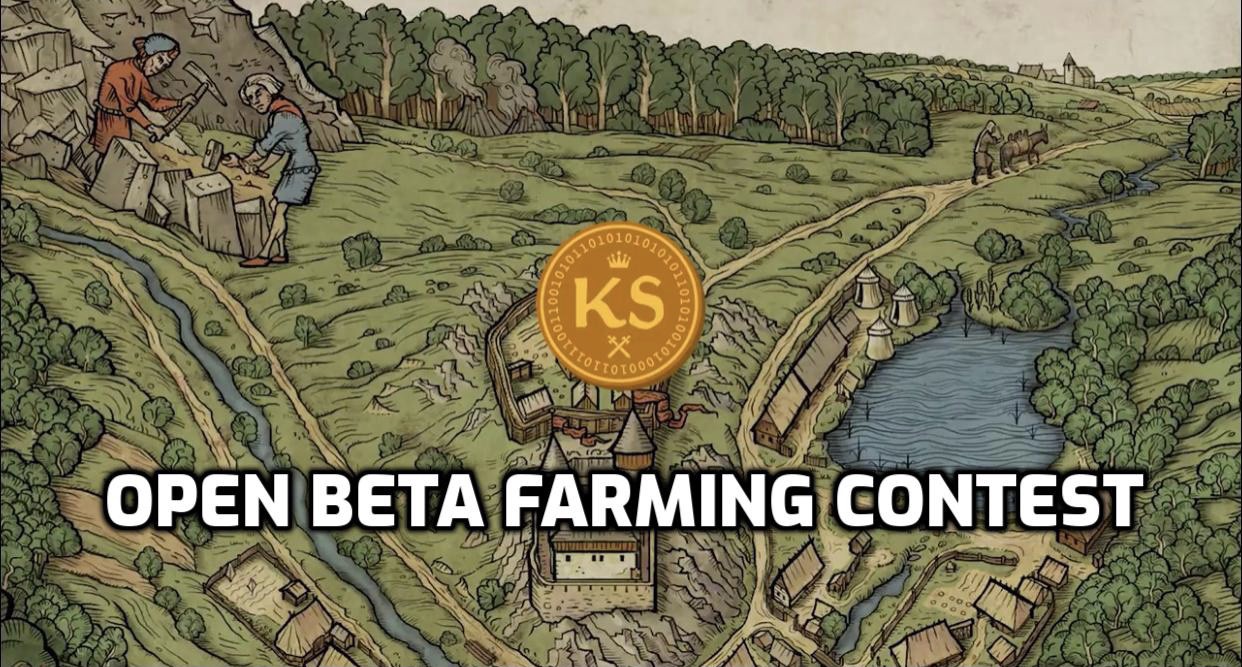 Rewards
The top 50 token farmers will receive the following prizes: 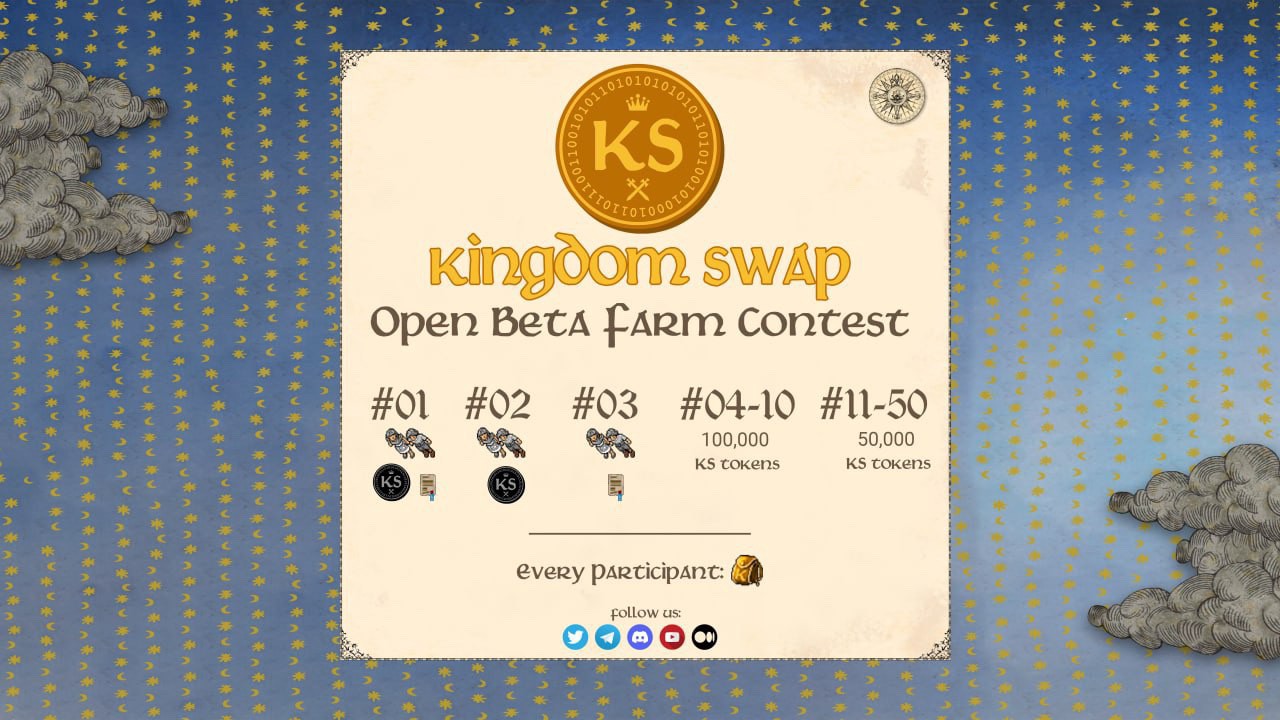 You can see a breakdown of our NFT rarity categories here: 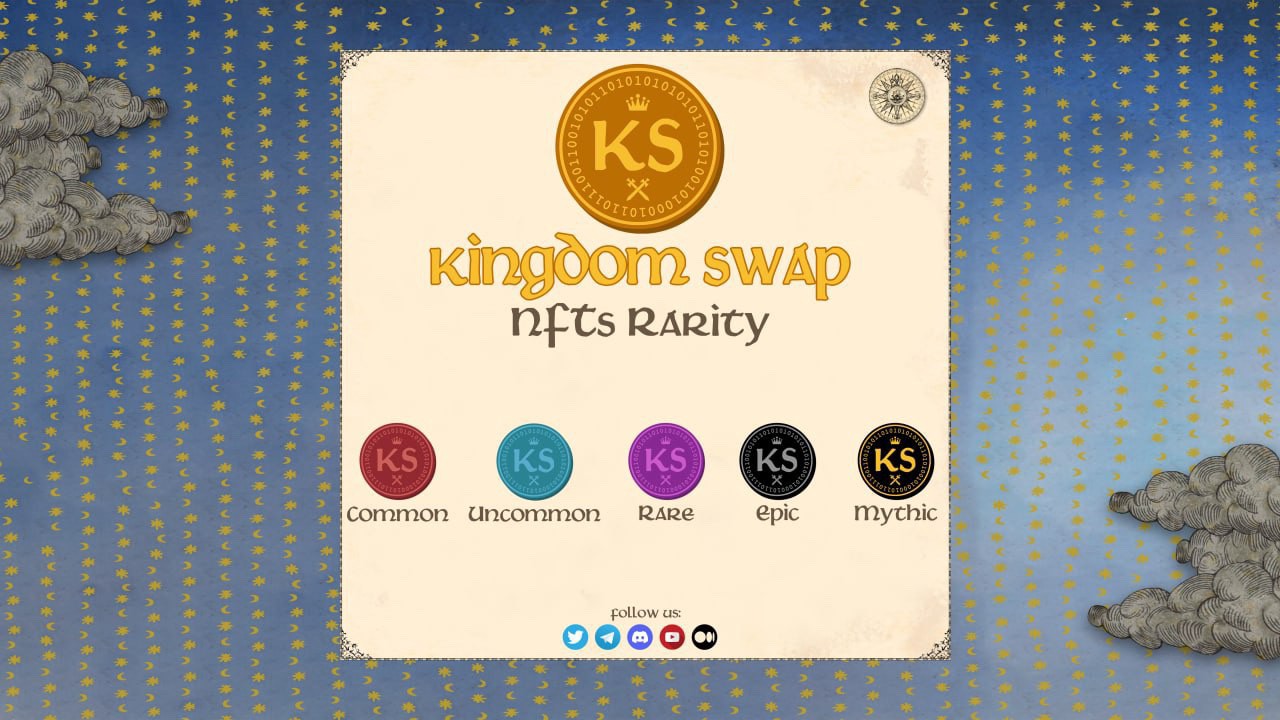 For those of you who participated, but didn’t make it to the top 50, fear not! Everyone who took place in the open beta contest will win an exclusive Kingdom Swap backpack collectible for free
Please note: The contest will conclude once the open beta closes. Rewards will be distributed upon $KS token and official mainnet launch.
Open Beta FAQ
Can I buy the token now?
No, as we haven’t launched yet. The $KS token deployment will take place once open beta is complete along with the mainnet game.
Can I buy items from the marketplace during the open beta?
You will be able to convert the gold coins you earned in-game into tokens that you can use in the marketplace. Please note you will not be able to buy/sell/deposit or withdraw tokens to your crypto wallet before the mainnet and $KS token deployment.

Can I keep the NFTs I collected during the open beta?
No. Inventories will be reset before the official game launch, meaning only the contest winners will get to keep their NFTs.

Why should I join the beta if I can’t save my progress after?
An open beta is a tool we use to collect as much data and feedback as we can before we launch our main product. By participating, you will help us gain a better understanding of our community and areas we can work on. The farming contest is an additional incentive we have put in place to support this, meaning you can also win some rewards while playing!
You will get a chance to explore different areas to hunt and farm, as well as develop your gaming technique by playing out different scenarios. By doing so, you’d be able to calculate potential profit and winning strategies before the official launch!

Server rates are going to be the same during beta and official release:
Can I use bots?
No! Any kind of third-party software and multi-client is strictly forbidden while playing Kingdom Swap. If attempt to do so you will be banned from the Kingdom Swap server.
I created my account with the wrong wallet, can I change it?
No. Your wallet address is directly connected to your account ID and cannot be changed after.
Our open beta has finally a date!
Discord | Telegram | Twitter | Youtube 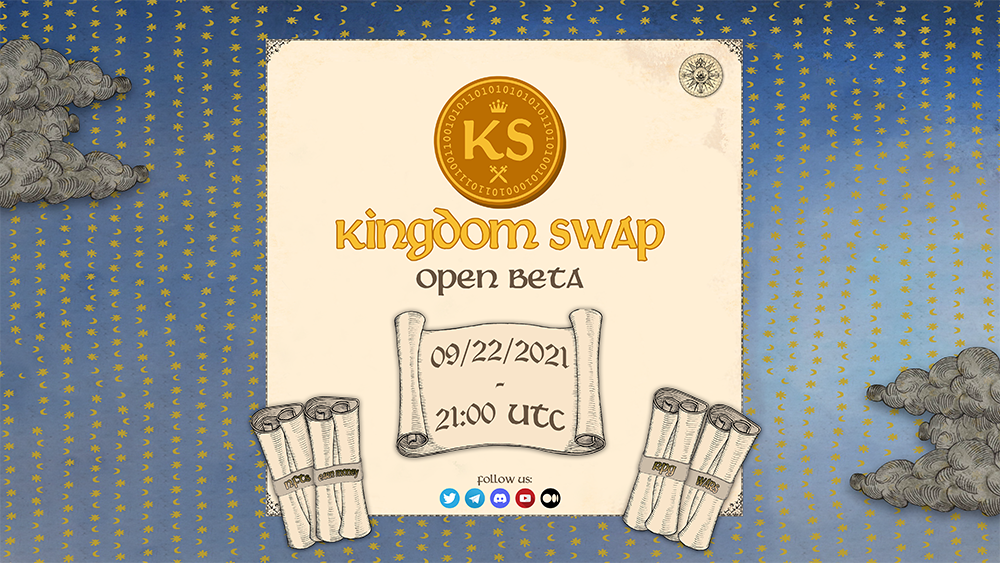 We will be launching an open beta next week so that all players can log into Kingdom Swap and see how the entire game / system works for
when the game finally starts, it will run as smoothly as possible.
Of course, we're going to use it as a way to find bugs too. We've tested almost everything tons of times, but we all know how a big release works.
During our beta we are also planning some marketing campaigns to bring in new investors/players. You will all know about it when the time comes.
The beta ends when the game is released, period. We don't have an exact date for it to finish, but we do want the official release as smoothly and quickly as possible. We are extremely confident that it won't be long.
About financial investments and pre-sales, they will also happen along the open beta, more information about that will be here when we have it all settled up.
*Please note that you will not be able to buy, deposit or withdraw any type of cryptocurrencies during the beta. The Kingdom Swap Token ($KS) will be officially released along with the game at the end of the beta.
*Even so, it will be possible to test the entire conversion system, market place of resources and NFTs, transfers and also the wallet system.
Thank you all for the support.
We hope you all are enjoying it as much as our team.
Welcome to Kingdom Swap
Kingdom Swap is an alternative Tibia Server based on Tibia 7.4. The game has a genuine 7.4 global map, with all the quests from that time, and much more... Kingdom Swap's RPG goes further. In addition to all the mysteries that will trap players in the game, our NFT system will take you even further.
In Kingdom Swap, the gold coins earned during the game can be swapped instantly into Kingdom Swap Tokens. Each gold coin is worth 1000 Kingdom Swap Tokens. The amount of Kingdom Swap Tokens you earn during your journey will be available on your account page.
You can use the tokens in our Market Place to buy features as premium time, change name/sex or transfer tokens to your BEP-20 Wallet. Which means that in addition to all the fun and mysteries to be unraveled playing Kingdom Swap, you actually earn money to play!
The Token
Pre Sale: TBA
Launch date: TBA
Telegram
Discord
Twitter
The Game
Launch date: TBA
Register
Download
Map